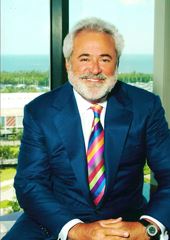 Attorney Stuart Z. Grossman, of Coral Gables, Florida-based Grossman Roth, has been named to the Lawdragon 500 Leading Lawyers in America.

The Lawdragon legal news and attorney information group recently released its fifth annual referral guide listing the top 500 lawyers in the nation. Lawdragon.com and the magazine Lawdragon are considered one of the world’s fastest-growing legal rating systems. Attorneys included on the top 500 list are chosen based on research and the participation of peers in the U.S. legal community.

Grossman attended law school at the University of Miami, where he was elected to the Iron Arrow honor society, the university’s highest honorary society. Other organization memberships and accolades include being named to The Best Lawyers in America annual, peer-reviewed legal referral guide; membership in the Academy of Florida Trial Lawyers; and induction as a Fellow in the International Academy of Trial Lawyers.

He has also received recognition as lead counsel for the case Goldberg v. Florida Power and Light, in which the largest verdict for the death of a minor was rendered in the United States. Grossman is currently chairman of the Margaux Miracle Foundation, a foundation named for his daughter Margaux, who passed away at the age of 15 after a battle with Ewing’s sarcoma.