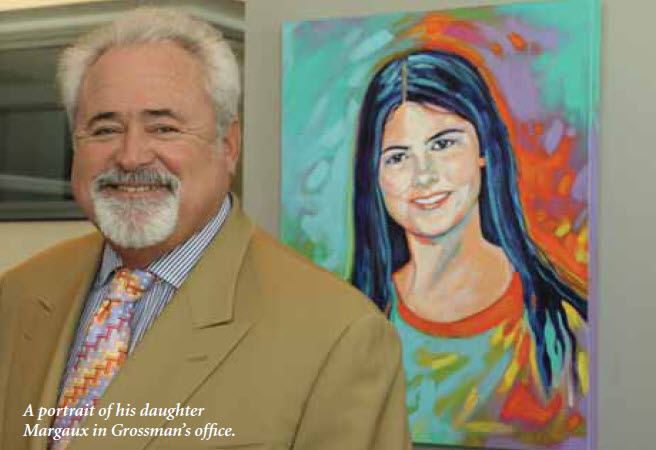 Stuart Z. Grossman has won many courtroom victories in his long career as a trial lawyer. But there is one case involving the death of a 12-year-old girl that left an indelible impression. “I, too, now know what it’s like to lose a daughter,” says Grossman, the founding partner of Grossman Roth, P.A. in Miami.

On September 12, 1997, seven FPL trucks were called to a Pinecrest home in the midst of a thunderstorm to raise and reattach a downed power line. To complete the repair, they had to turn off the power to the neighborhood, including a traffic light at a busy intersection. Jill Goldberg was riding home with her mother when their car was struck by another vehicle at that intersection. She was taken to Ryder Trauma Center at UM/Jackson Memorial Hospital but did not survive.

“That began a legal battle that lasted for eight years,” says Grossman, who represented the parents, Walter and Rosalie Goldberg. “Traditionally, the utilities have enjoyed tremendous immunity in these situations.” During the trial, Judge Juan Ramirez found that FPL should have notified local police, directed traffic, and taken other actions. The jury awarded the Goldbergs $37.4 million, the largest verdict in Florida for the wrongful death of a child. FPL appealed the verdict, and in 2005 the Florida Supreme Court unanimously ruled in favor of the parents with a $10 million judgment.

During the long case, Grossman’s daughter Margaux passed away after a struggle with Ewing’s sarcoma, a rare form of cancer. Among the mourners at the 2001 funeral were the Goldbergs. To honor her memory, Grossman created Margaux’s Miracle Foundation at Memorial Sloan Kettering Cancer Center. To date, the foundation has raised more than $1.3 million for a cancer research fellowship.

Grossman is also an active supporter of United Cerebral Palsy, United Way, and other medical-related charities. “I’ve known Stuart since he was a young lawyer, and the loss of Margaux affected him deeply,” says Aaron Podhurst, partner, Podhurst Orseck, P.A., Miami. “He was able to fight back from that sadness through his philanthropy. He takes a personal interest in helping people with cancer find the right specialist, as well as raising funds for research.”

Podhurst, who has known Grossman since he was a young lawyer, says his friend has toned down his courtroom style – at least to some degree – in recent years. Known for his custom-tailored suits, Grossman now has a “more establishment” look in the courtroom. “But he’s still very animated on behalf of his clients,” Podhurst says. “When he walks into a room, all eyes go on him. Grossman says he has always been a “high energy person,” who loves the drama of the courtroom. Born in 1947, he graduated from Coral Gables High School. “I loved English and drama, and wanted to teach literature,” he recalls.

“A friend of mine showed me the LSAT review book and I said to myself, ‘Maybe I’ll do that someday.’ I always had a sense of justice and fair play, but didn’t know that the law would turn out to be my life’s work and passion.” After earning a bachelor’s degree from the University of Miami, Grossman enrolled in law school at George Washington University.

But the Vietnam War-era draft intervened and Grossman spent two years on active duty with the U.S. Coast Guard. “That turned out to be one of the best things that happened to me, even though I didn’t realize it at the time,” says Grossman. “It showed me more of the world than just being a student.”

Grossman returned to Miami, where he earned his law degree at the University of Miami and worked as a law clerk and later an associate for renowned trial attorney J.B. Spence. After building his skills and credentials for 15 years, Grossman formed his own personal injury firm in 1988.

Today, Grossman Roth has eight full-time and two of-counsel attorneys, and offices in Coral Gables, Boca Raton, Fort Lauderdale, Sarasota, and Key West. “We’re more like a family than a firm,” he says. Grossman is widely recognized as one of the nation’s leading trial lawyers, concentrating his practice in medical malpractice, products liability, police misconduct, aviation, and personal injury litigation. In 37 years, he says he has only lost four cases. “For me, the courtroom has always been the payoff,” he says. “It’s a chance to shine on the stage.”

He was named “Florida Trial Lawyer of the Year” by the American Board of Trial Advocates of Florida, and received the Academy of Trial Lawyers’ Crystal Eagle Award and was voted into its hall of fame. He is a fellow of the International Academy of Trial Lawyers and was elected into the Iron Arrow, the University of Miami’s highest honorary society. In keeping with that tradition, his son Joe is a business student at the University of Miami.

Grossman remains a diehard Hurricanes fan, often traveling to football games with his fiancé Polly Schiff, a luxury real estate professional. We have a trainer and work out in the pool and the gym four or five times a week, he says. I own a horse and ride frequently. For weekend getaways, Grossman owns a second home in Key West where he likes boating, fishing, and diving.

Back in the courtroom, Grossman is active in the lawsuits against BP following the Gulf oil spill, as well as his medical malpractice cases and other high-profile actions. “As a personal injury attorney, you have the power to make lives better,” says Grossman. “I consider it a privilege to be able to serve clients who have been faced with terrible situations and help them achieve a just resolution. I am not cut out to defend a criminal, but I will do everything in my power to help the victim.”

This article was written by Richard Westlund, and it first appeared in the 2011 issue of South Florida Legal Guide.